Bobwhites signify the decline of an entire suite of species adapted to grassland ecosystems in the US. The root cause of the declines are the same, habitat loss at the landscape-scale: the near demise of the pine-barrens of the northeast; longleaf pine-wiregrass ecosystem of the south; the oak savannas of the central hardwoods; the shortleaf pine-bluestem ecosystem of the midwest; or the prairies of the southwest. These ecosystems were once maintained through fire and grazing, which sustained a ground cover of vegetation with the appropriate structure and composition for bobwhites. The habitats bobwhites rely on have structural and plant composition characteristics that are shared by a myriad of species which, unfortunately, are also sharing a similar fate as bobwhites. 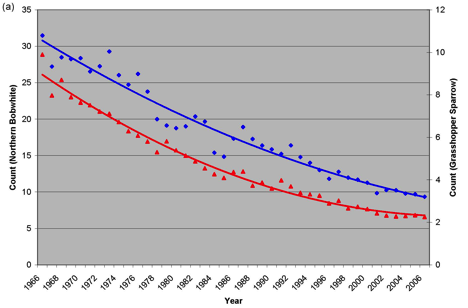 For most of the 19th and 20th centuries, land use served to increase bobwhite populations. But with the advent of modern agricultural and silvicultural practices following World War II and the stamping out of the cultural use of fire to manage forests and fields, the diverse ground cover needed by these species has mostly vanished. To stop the decline of bobwhites will take habitat restoration on the landscape-scale, and it will require restoring desirable disturbance cycles (such as prescribed fire at the appropriate scale and frequency) on our remaining native habitats on private and public lands.

While declines have been precipitous, the good news is that bobwhite populations still exist in sufficient numbers across significant portions of their range that they can respond, in time, to sound and targeted habitat initiatives. The next few decades may be our last opportunity to halt the declines, as there are already areas where bobwhites are gone.

The State of the Bobwhite

The Bobwhite Almanac is an annual publication of NBCI that provides a range-wide snapshot of population, hunting, and conservation status of the northern bobwhite, as well as looks at efforts underway to reverse the bobwhite decline.