The bobwhite as an “umbrella species,” the science behind native grasses as the best choice on working lands, bobwhite 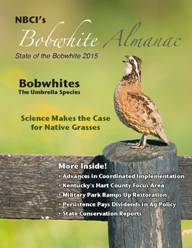 conservation reports from 25 states and the advances made in the coordinated implementation of bobwhite focal areas are but a part of the National Bobwhite Conservation Initiative’s (NBCI) newest “State of the Bobwhite” report.

This fifth annual report has grown from a basic survey of bobwhite conservation activities among the 25 NBCI states the first year to include examination of agriculture and forest management policies, the science behind the NBCI strategy of landscape-scale bobwhite restoration, as well as efforts in various parts of the NBCI region that are advancing that strategy.

State of the Bobwhite 2015, for example, examines the federal policy bias toward the use of exotic grasses on tame pasturelands and pulls together the research that shows native grasses are competitive or superior in every critical area – water quality, soil conservation, soil function, air quality, forage, biomass and wildlife.

The 2015 report also revisits NBCI’s successful efforts to convince the U.S. Department of Agriculture to approve the dry corners of crop fields irrigated with center pivot systems as eligible for establishment as quail habitat under the continuous Conservation Reserve Program. (Center pivot irrigation is used in 24 of the 25 NBCI states.)

‘State of the Bobwhite 2015’ also visits Pea Ridge National Military Park in Arkansas to see how park personnel are working with NBCI, Arkansas Game & Fish and other partners to make the park the first NBCI Bobwhite Focal Area on National Park Service property – and the first such focal area in the state.

For these and other stories, look for “NBCI’s Bobwhite Almanac, State of the Bobwhite 2015” at www.bringbackbobwhites.org.

Headquartered at the University of Tennessee Institute of Agriculture’s Department of Forestry, Wildlife and Fisheries, NBCI is an initiative of the National Bobwhite Technical Committee (NBTC) to elevate bobwhite quail recovery from an individual state-by-state proposition to a coordinated, range-wide leadership endeavor. The committee is comprised of representatives of 25 state wildlife agencies, various academic research institutions and private conservation organizations. Support for NBCI is provided by the Federal Aid in Wildlife Restoration Program, state wildlife agencies, the University of Tennessee and Park Cities Quail. For more information, please visit www.bringbackbobwhites.org and find us on Facebook, YouTube and Slideshare.