An uncommon bobwhite convergence occurred in mid-February in Kansas City, MO, demonstrating a high level of hope that continues to burn among passionate quail hunters and conservationists. The occasion was the 2016 National Pheasant Fest and Quail Classic, February 19-21, at the Kansas City Convention Center, hosted by Pheasants Forever/Quail Forever (PF/QF). Following establishment of its affiliated Quail Forever organization in 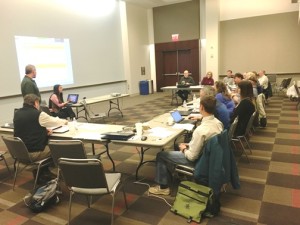 2005, Pheasants Forever has expanded their pre-existing annual convention to place increasing emphasis on quail. Upon QF’s 10th anniversary in 2015, the organization made a marked commitment to raise its game by more overtly and strategically engaging the states and the broader bobwhite conservation community. PF/QF’s enhanced focus on bobwhites began with an expanded quail emphasis at this 2016 convention, including a high-profile “Quail Summit” focused on bobwhite conservation. QF made a next key step by inviting the Steering Committee of the National Bobwhite Technical Committee (NBTC) to hold its annual winter meeting at the Pheasant Fest and Quail Classic, instead of the normal meeting location on the University of Tennessee campus. QF offered numerous accommodations to reinforce its overture. Following acceptance of the QF offer by the NBTC Steering Committee, QF then worked with the NBCI to accommodate a full NBCI staff meeting at the Kansas City event, complete with a complimentary NBCI booth on the convention floor. Thus for a week, Kansas City hosted a rare convergence of the nation’s leaders in bobwhite conservation. The national staff of the NBCI met in private for a two-day organizational strategy session. Then the NBTC Steering Committee convened for two days of reports, reviews, guidance and decisions on behalf of the 25 bobwhite states and non-state conservation partners. These two internal bobwhite conservation business meetings were followed by 2½ days of Pheasant Fest and Quail Classic events, in which myriad conservation agencies and organizations, as well as sporting businesses, participated. The combined effect was energizing. NBCI staff was able to have conversations with many QF members, chapter presidents, etc. Across the board, our conversations were substantively about habitat rather than “silver bullet” shortcuts to the bobwhite problem, a testament to QF’s conservation messaging to its members. A National Park Service official also sought us out for an extended conversation about continuing to move nationally down the cooperative path we blazed with the NBCI focal area project at Pea Ridge National Military Park in Arkansas, the first on NPS property. NBCI also met with a biologist involved in the upcoming establishment of two bobwhite focal areas in Illinois. One of the most difficult challenges confronting bobwhite conservationists is the pervasive erosion of hope for successful restoration. Yet the enthusiastic convergence of so many dedicated, determined bobwhite aficionados – professional wildlife managers, hunters and other conservationists – was a welcome and needed shot of adrenaline. The occasion also was a key reminder that where so many hopeful people remain, hope remains as well. March 2, 2016