Partnerships are key to getting habitat work on the ground and restoring northern bobwhites to huntable populations.

One such partnership was created after many months of work between state wildlife agencies, the United States Forest Service (at the Region 8 office in Atlanta, GA and the Washington DC headquarters), along with efforts from several staff members of the NBCI.

This past June a working agreement was signed between the Region 8 office, National Bobwhite Conservation Initiative, the GA Wildlife Resources Division, the South Carolina Department of Natural Resources, the Oconee Ranger District of the Chattahoochee-Oconee Forest and the Enoree District of the Sumter National Forest. This agreement will allow for the USFS and the wildlife agencies within Georgia and South Carolina to create and manage suitable habitat on a scale that is sufficient enough that bobwhites can survive over time, and to prove that habitat is the missing piece in restoring bobwhite populations. Funding for the NBCI Focal Area projects came from the USFS Washington Office via hazardous fuels funding in the agency’s State and Private Forestry Office.

The agreement didn’t happen overnight. It started several years ago with conversations between staff of the GA Wildlife Resources Division Bobwhite Quail Initiative, the Oconee Ranger District and the Piedmont National Wildlife Refuge. These meetings laid the groundwork for future meetings in the fall of 2015 between USFS Region 8, USFWS Region 4, GA WRD and NBCI. These meetings were held so that staff from the federal agency region offices could be made aware of the importance of early successional habitat and that without it species like the northern bobwhite, a number of other declining priority songbirds, and pollinators would continue to decline.

These first meetings were just a beginning. As NBCI forestry coordinator, I was asked by Tony Tooke, Regional Forester for Region 8, to poll the state wildlife agency quail coordinators within the Southern Region on which National Forest properties within their states that had highest potential for quail management and partnerships between the USFS, the states and NBCI. Findings of this survey were provided to Forest Service Staff in follow-up meetings.  Subsequently, the Region 8 office issued a briefing paper to Forest Supervisors in five states identifying their national forest lands as highly suited to quail habitat restoration.

While talks continued throughout the winter months with region staff, other NBCI staff was talking with Forest Service staff in Washington. These talks eventually led to an offer from the Washington office for funding  that could be used on National Forest lands for quail habitat restoration. NBCI had the responsibility of writing a proposal and working with the WO and RO to iron out the details of the proposal. After more discussions everyone was able to agree on projects where the funding could be used to best benefit bobwhites and other associated species on two national forests in Georgia and South Carolina.

Even though these two areas were chosen, there are still many other opportunities to manage for bobwhites and other associated early successional species on Forest Service lands within the 25-state National Bobwhite Conservation Initiative. Just recently, at the National Bobwhite Technical Committee meeting in Lincoln, NE, announcements were made by the state quail coordinators from Louisiana and Alabama that progress is being made in identifying areas on National Forests within their states (Conecuh in AL and Kisatchie in LA) that could be intensively managed to create bobwhite habitat and classified as official NBCI Focal Areas. 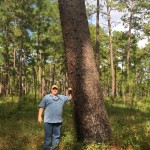 NBCI Forestry Coordinator Steve Chapman is a certified forester from Georgia with 30 years of experience and a reputation of working closely with biologists to create wildlife habitat in forested settings. Chapman promotes NBCI’s forested grassland habitat objectives for bobwhites and other grassland birds at national, regional and state levels, including serving as a liaison and technical resource for state, federal and other conservation entities, engaging the U.S. Forest Service at regional and national levels to increase opportunities for bobwhite habitat projects and working to improve forest management and prescribed fire policies in support of forested grasslands habitat range-wide.

A graduate of the University of Georgia’s Warnell School of Forestry and Natural Resources with a B.S. in Forest Resources, Chapman worked with the Georgia Forestry Commission for 27 years before launching his own habitat management services company. Chapman is active in the Society of American Foresters, serves on the board of his local chapter of the National Wild Turkey Federation, was a principal in the development of the first Longleaf Academy, served on the NRCS State Technical Committee and was a member of the Southeastern Forestry and Wildlife Working Group.