Partners in Flight (PIF) recently released a comprehensive revision of the network’s landmark 2004 North American Landbird Conservation Plan.  Formed in 1990 with the vision to keep common 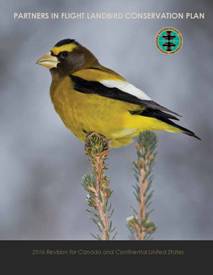 birds common, PIF initially focused on unique and overlooked needs of migratory forest interior songbirds but has gradually broadened to consideration of the full spectrum of North American landbirds.  Bobwhite folks long have actively engage the PIF community, motivated by the power of unity and the reality of shared habitats among numerous priority species.  PIF folks have been receptive, responsive and mutually engaging, resulting in minimizing the old game/non-game attitudes and barriers that once impeded collective action and progress.

The 2016 PIF Plan (www.partnersinflight.org) provides updated information, a refined assessment of priority species and conservation urgency, regional profiles (by joint ventures) and highlights on interesting species or initiatives.  As it illuminates that many of the steepest recent declines are among grassland birds, the Plan includes a full-page spotlight on the NBCI and bobwhites, and the native grasslands habitat overlap with priority songbirds such as painted bunting, dickcissel, scissor-tailed flycatcher, field sparrow and loggerhead shrike.  Bobwhites are a priority in 11 joint venture features, with pictures and discussion in at least two of those, while the Plan also highlights priority status of other declining resident game birds in numerous places, further erasing old divisions.

More important is the substance of the new Plan’s findings.  Six species of resident game birds “earned” spots on the PIF Watch List of species of continental concern:  Gunnison sage-grouse, lesser prairie-chicken, mountain quail, scaled quail, greater sage-grouse and greater prairie-chicken.  Bobwhites “earned” a spot near the top of the PIF list of Common Birds in Steep Decline, with an 83% population decline since 1970.

The most disconcerting findings arise from PIF’s innovative new “half-life” analysis, predicting the period in years for a species’ current continental population to decline by half.  Of PIF’s 24 Common Birds in Steep Decline, the shortest predicted continental half-life is for bobwhites:  10 years.  Further, of the 86 species on the new PIF Watch List, only one species has a shorter predicted half-life than bobwhites:  scaled quail.  Finally, of all 448 North American landbird species included in the new PIF Plan, none have shorter predicted half-lives than bobwhites and scaled quail.  The Plan also illuminates predicted bobwhite half-lives by joint venture:

This thought-provoking PIF half-life approach to assessing the conservation urgency of bobwhites and other declining species is simply sobering.  But the new PIF Plan can and should be motivating, for it highlights urgent common interests among diverse, capable bird conservation groups.  PIF, NBCI, joint ventures, federal and state agencies, and non-government organizations have collective capacity to make positive change if we can double down on our collaborations.  Meanwhile, half-lives are ticking away.