Prescribed burning in grasslands during the growing season as a management practice has been quietly taking place for a number of years, primarily by out-of-the-box thinking land managers. It is only recently that researchers have been looking at the practice and others are beginning to take notice. I suppose you could say it is in the early adoption phase.

Many are skeptical that a burn can be conducted during the growing season. After all, how can something that green burn? What about fuel moisture and the humidity? Typically, those are higher than what we normally conduct burns under. Then there are others concerned about the loss or damage to flora or fauna, and while those concerns are warranted, if the burn is planned and implemented properly, those impacts are minimal.

First, as long as there is residual dead material from previous years’ growth, lush, green native grasses will burn during the growing season. Surprisingly well, in fact. The key is enough residual old growth to be fuel for the fire. Without that, it won’t burn – except under extreme circumstances under which you shouldn’t be conducting a prescribed burn anyway. Second, fuel moisture is much higher in the new green growth but fuel moisture in the dead residual material is much lower, though not as dry as during the dormant season; humidity varies greatly from west to east and relative to rainfall zones but is usually higher than during the dormant season as well. These two factors combined actually make growing season burning safer and less work than dormant season burns because the fire is less volatile, much slower moving and easier to extinguish.

Finally, to address the potential loss or damage to flora and fauna, burn only a portion of the total area within the field or planning unit. While burning during the growing season will damage some plants and animals, if areas are left unburned, they will serve as refuges, thus not eliminating entire populations of susceptible species and providing sources to repopulate the burned area.

I will provide a personal example of how growing season burning can create biodiversity. I don’t recall exactly when, but somewhere around 2000 I decided to try a growing season burn on an old big bluestem seed production field that was no longer productive. I conducted the burn in late July. The first thing I noted was the regrowth the bluestem put on after the burn. Within just a few days, bluestem shoots were emerging from the ground and by the time of our first frost plants were 12 – 18 inches tall.

From the bobwhite management perspective, this is an ideal height for nesting cover the next spring and the residual leaves can provide nest building material. The following summer I saw a number of different forbs begin to show up, ones which I’d never noted before. The balance of grasses to forbs was shifting. After several years of growing season burns the area is now a mixture of grass and forbs with about a 50:50 ratio of the two. 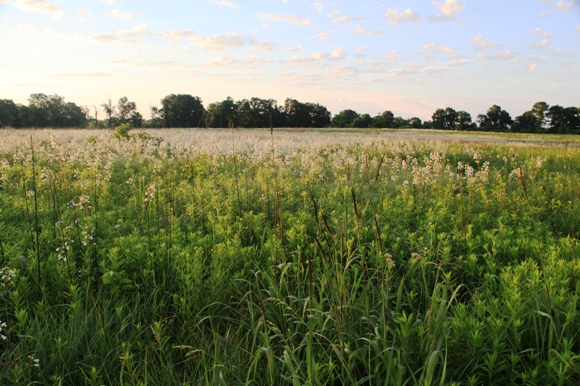 This is the same field used to show the mosaic burn pattern of a growing season burn but this photo was taken the spring following the August burn. Note the mixture of grasses and forbs. The flowering plants are foxglove beardtongue. (Jef Hodges)

June is a good time to start planning your growing season burns, in preparation for late July or August. If planning to burn CRP as a mid-contract management practice be sure to check with your state about the primary nesting season dates and be sure to burn outside of those. If not burning CRP, burning can be conducted anytime, just be sure to leave unburned areas as refuges.

NOTE: there is always concern about destroying or disrupting bobwhite or other grassland bird nests with growing season burns. Weigh the risks against the benefits when deciding when to burn, keeping current habitat condition in context. If the grasses are thick and rank with lots of accumulated litter, odds are against quail nests or broods being present, whereas newly burned areas will provide ideal nesting in the future.

You should also prepare your fire guards. If mowing, mow them regularly to keep them functional. Fire guards mowed a few days before the burn don’t function very well; duff from the mower is likely to carry fire. Bare dirt fire guards left idle can grow up in annual plants, providing brood cover and high energy food sources later in the season.

Other considerations about growing season burns: 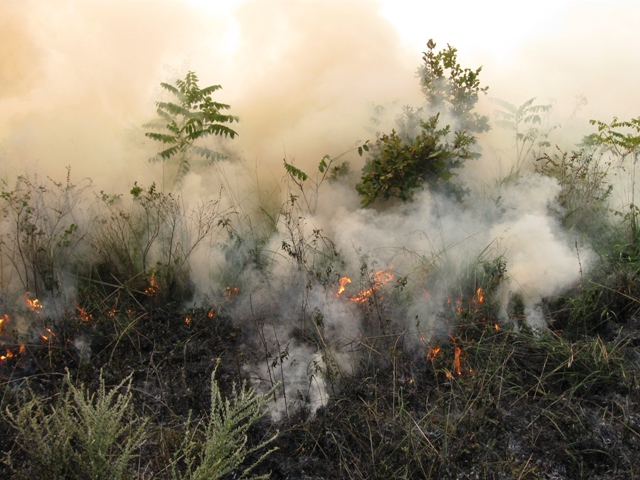 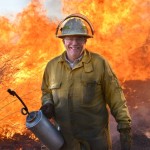