An autumn consumed by personal transition interfered with—well, squashed—any ambitions for bird hunting this season. Thankfully, friends and colleagues have provided tales and pictures of numerous excellent bird hunts for my vicarious fulfillment.

My 2017 ended at Orange Beach, Alabama with parents and siblings, for what is becoming a new family holiday tradition. It’s not Midwestern bird hunting, but it’s still a neat area and a needed change of scenery, with fantastic seafood and no crowds this time of year.

On Christmas Day, I went to Gulf State Park for another long bird walk by myself on the impressive network of trails and boardwalks. The 6,150-acre park protects but provides public access to 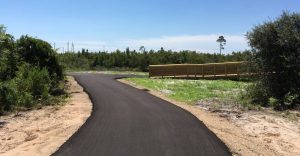 habitats varying from beach, to inland dunes and swales, to pine forest, as far as 1½ miles inland. The day before, on a different trail, I had seen two medium-sized cottonmouths, and earlier on this walk a fair-size gator greeted walkers and bikers. So when I heard unusual, sustained rustling in the leaves under some brush near a lesser-used trail, I approached cautiously to investigate. Imagine my surprise when a full-size covey of bobwhites exploded from under the brush within 5 feet of me, scattering only a short distance to the ample brushy escape cover! 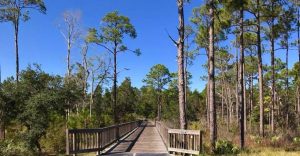 A network of trails at Gulf State Park provide a view of a variety of habitats.

The covey was only 1 mile by air from the ocean, and the beachfront condominiums were easily visible. I would not have bet a dime on seeing bobwhites in that location. Even though the habitat technically appears suitable, I just assumed the surrounding landscape was too developed and too busy for bobwhites to be able to hang on.

I called the park later and talked with Casey, a staff biologist from Auburn (War Eagle!), who was jazzed to hear my report. She said releases of penned birds are not allowed, and that a persistent population of wild bobwhites can be heard singing all around the park in summer, but that coveys are rarely seen.

When hunting, every single covey of provides a thrilling adrenaline rush; but finding a covey when it is not being sought and is least expected is an extra-special gift. I am banking on my surprise Christmas Covey being an omen for a good 2018!