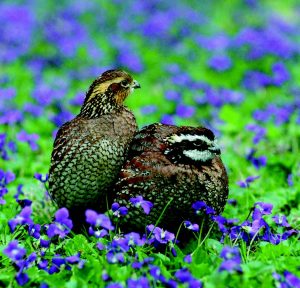 WASHINGTON (March 29, 2018) – As many as one-third of America’s wildlife species are at increased risk of extinction, according to a new report by the National Wildlife Federation, the American Fisheries Society and The Wildlife Society.

“America’s wildlife are in crisis and now is the time for unprecedented on-the-ground collaboration,” said Collin O’Mara, president and CEO of the National Wildlife Federation. “Fish, birds, mammals, reptiles and invertebrates are all losing ground. We owe it to our children and grandchildren to prevent these species from vanishing from the earth. Recovering wildlife is a win-win-win: strengthening our economy, improving public health, and making communities more resilient.”

About one-third of the nation’s best-known groups of species—from vertebrates, like birds and mammals, to invertebrates such as butterflies and freshwater mussels—are imperiled or vulnerable. These figures, based on conservation status assessments carried out by NatureServe and its state natural heritage program partners, paint a stark picture of the overall condition of America’s extraordinary diversity of wildlife.

“I have spent more than three decades looking at how wildlife in the United States are faring,” said Bruce Stein, PhD, chief scientist and associate vice president of the National Wildlife Federation. “Although there have been some great conservation successes, many of our species continue to decline, and we are seeing the emergence of major new threats to America’s wildlife. It’s time to make sure that the scale of our conservation efforts match the scope of this problem.”

Among the findings in Reversing America’s Wildlife Crisis: Securing the Future of Our Fish and Wildlife:

• One-third of America’s wildlife species are at increased risk of extinction.
• More than 150 U.S. species already have gone extinct.
• Nearly 500 additional species have not been seen in recent decades and are regarded as possibly extinct.
• Approximately 40 percent of the nation’s freshwater fish species are now rare or imperiled.
• Seventy percent of North America’s freshwater mussels are imperiled or already extinct.
• Pollinator populations are dropping precipitously. Monarch butterfly populations in the eastern U.S., for instance, have dwindled by 90 percent over the past two decades.
• Thirty percent of North America’s bat species have seen significant declines over the past two decades
• Amphibians are disappearing from their known habitats at a rate of 4 percent each year.

“Wildlife in America need help. Species are increasingly at risk in all regions of the country and across all categories of wildlife,” said John McDonald, PhD, president of The Wildlife Society. “This decline is not inevitable. Wildlife professionals in every state have action plans ready to go to conserve all wildlife for future generations, but we need the funding to turn this situation around.”

The report also describes success stories where concerted, collaborative efforts have been able to make a difference for at-risk species of wildlife.

• By the late 1970s, not a single Canada lynx was found in Colorado. These solitary cats play an important ecological role, balancing the populations of smaller mammals like snowshoe hares. Two decades ago, Colorado Parks and Wildlife started a lynx reintroduction program; today a self-sustaining population of 150-250 lynx now roam Colorado’s backcountry.

• New England cottontail populations have dwindled for decades due to habitat loss; the species was once a candidate for listing under the Endangered Species Act. A collaborative effort between states, federal agencies, tribes, and non-profit organizations created lost habitats and reintroduced captive-bred rabbits to the wild.

• Brook trout populations in the eastern U.S. currently exist in just 10 percent of its historic habitats, but a partnership with members from Georgia to Maine—including 17 different state wildlife agencies—is working to improve the outlook for the prized sportfish.

“Nearly half of our fish species are struggling. Other aquatic species, like mussels, are in even worse shape,” said Drue Winters, policy director of the American Fisheries Society. “We know how to improve the outlook for our America’s aquatic wildlife and we know this would have economic benefits as well—we just need the political will to make it happen.”

The National Wildlife Federation is uniting all Americans to ensure wildlife thrive in a rapidly changing world.

The Wildlife Society works to inspire, empower, and enable wildlife professionals to sustain wildlife populations and their habitats through science-based management and conservation.