A flash of white, brown, and black feathers bursts from the waist-high grass in a flurry of rhythmic wingbeats. Seconds later, a dozen bobwhite quail sail out of sight towards a small thicket of trees lining the edge of an open field spotted with patches of mixed prairie grasses. This is the picture that comes to mind when imagining perfect bobwhite quail country. But now scenes like this are rare across much of the Eastern United States.

The bobwhite quail used to be found across the United States’ open prairies and grasslands, but in the last 100 years their populations have declined dramatically. Some regions of the country have seen bobwhite quail populations fall by as much as 80% since the mid 1900s.

This rapid decline in bobwhite quail numbers is due in large part to habitat loss—they are running out of places to mate, live, and hide. Homes, roads, and buildings have sprung up on the grasslands the bobwhite quail once called home. In addition to the bobwhite quail, many other wildlife species such as songbirds, invertebrates, mammals, and birds of prey rely on these disappearing grasslands.

Small in size, quick on the wing, and well adapted for open grasslands, the bobwhite quail is a little upland bird that was once prevalent from the Rocky Mountains to the Atlantic Ocean. Today it’s limited to the southern Great Plains spreading eastward to the Southeastern United States. This baseball-sized bird is covered with mottled brown, tan, gray, white, and black feathers and weighs only a few ounces.The bobwhite quail lives in coveys of up to 20 birds, and the quail’s survival is highly dependent upon grassland ecosystems.

For centuries, hunters have pursued this popular game bird, and birders enjoy listening to the distinct call of the bobwhite and watching their quick escapes on the wing. In addition to their recreational value, quail are also a crucial part of the grassland itself.

The presence of quail in a grassland helps show if the ecosystem is healthy. A healthy grassland has the right balance of vegetation, food, space, and shelter for a wide variety of wildlife species. This robust grassland looks like an open prairie with waist-high grasses, spots of bare ground, and smaller trees or shrubs on the edges of a field. The grassland ecosystems that are most beneficial for quail contain the perfect amount of shelter, feed, and open spaces.

As suitable bobwhite quail habitat across the eastern United States continues to decrease, the National Park Service (NPS) works to help address the issue of grassland preservation and restoration. The NPS is collaborating with several state wildlife agencies and private organizations to get a larger grasslands restoration effort rolling on NPS lands across the Eastern United States.

The idea of collaborating with a state wildlife agency and a non-government organization to restore grassland ecosystems within specific national parks came from a grasslands restoration project at Pea Ridge National Military Park, located in northwestern Arkansas. The NPS partnered with the Arkansas Game and Fish Commission, and the National Bobwhite Conservation Initiative to restore, maintain, and manage Pea Ridge’s grasslands and prairies. Restoring these grassland habitats, including declining bobwhite quail populations as well as other critical ecosystem components, is a priority for all of the parties involved in the project.

Physically restoring a landscape requires many different management practices. This is especially true when it comes to reestablishing habitats that have been altered for centuries. Over the past two centuries, the land that currently makes up Pea Ridge National Military Park has served as native prairies, battlefields during the Civil War, and farm grounds. Before the land at Pea Ridge National Military park was used for battle fields and farms, it was used and managed by American Indians.

Some of the restoration techniques used at Pea Ridge include: 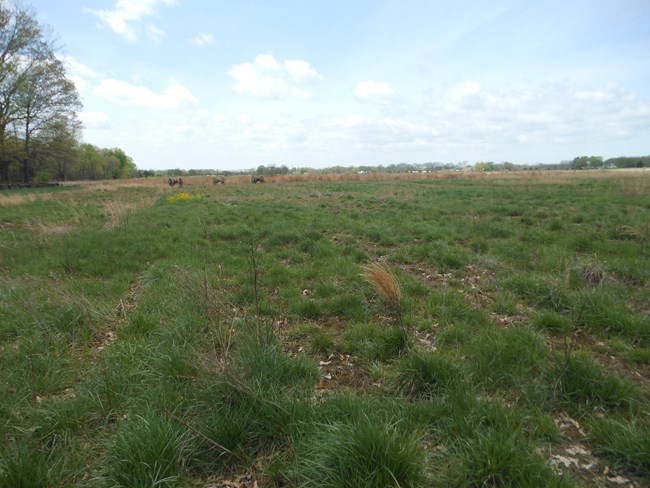 These restoration practices help create a healthier grassland ecosystem in many ways. Controlled fires remove most of the overgrown, non-native, and weedy plant species within a grassland ecosystem. The controlled fires make space for younger native grasses and forbs, which are different types flowering plants commonly found in grasslands. Young native plants also provide food and shelter for grassland wildlife species, such as the bobwhite quail.

In addition to new plant life, areas that lack vegetation and have open patches of soil are another key component of excellent wildlife habitat, including bobwhite quail habitat. The quail use these areas to “gravel up” after they feed. When a quail “gravels up,” it eats small stones and pieces of gravel that help it digest its food. An open landscape with smaller sections of trees and shrubs also provides excellent shelter for the bobwhite quail and many other wildlife species such as songbirds, small mammals, and invertebrates.

Although bobwhite quail and grassland-dependent bird numbers have largely been declining in the Eastern United States, some populations have begun to make recoveries in recent years as their habitats recover too.

Riding on the coattails of the success at Pea Ridge, other national park units have recently begun their own restoration initiatives, and dozens more have expressed interest in employing similar projects in the future.

National Park Service ecologists and biologists are exploring and implementing similar efforts at other parks in the United States such as Manassas National Battlefield Park in northern Virginia, Chickasaw National Recreation Area in southern Oklahoma, and recently Horseshoe Bend National Military Park in central Alabama. These restoration projects are similar to the Pea Ridge restoration project and will require collaboration with other government agencies, state natural resource departments, non-government organizations, and private landowners.

Moments after the covey of bobwhite quail glides into the thicket of trees lining the open grassy field, a sharp whistle calls out from underneath one of the trees. Not far off, another whistle answers back. Bob-white, they both call out in a rising, two-toned whistle. Several more whistles echo the same call from across the field. Among the tall prairie grasses that sprawl out from the edges of the trees, the rustling of running quail and their sharp whistles bring the prairie to life.

As grasslands at certain national park units begin to make a recovery thanks to habitat restoration efforts, so will the wildlife species that depend on those habitats. The bobwhite quail is just one example of a success story among many others.