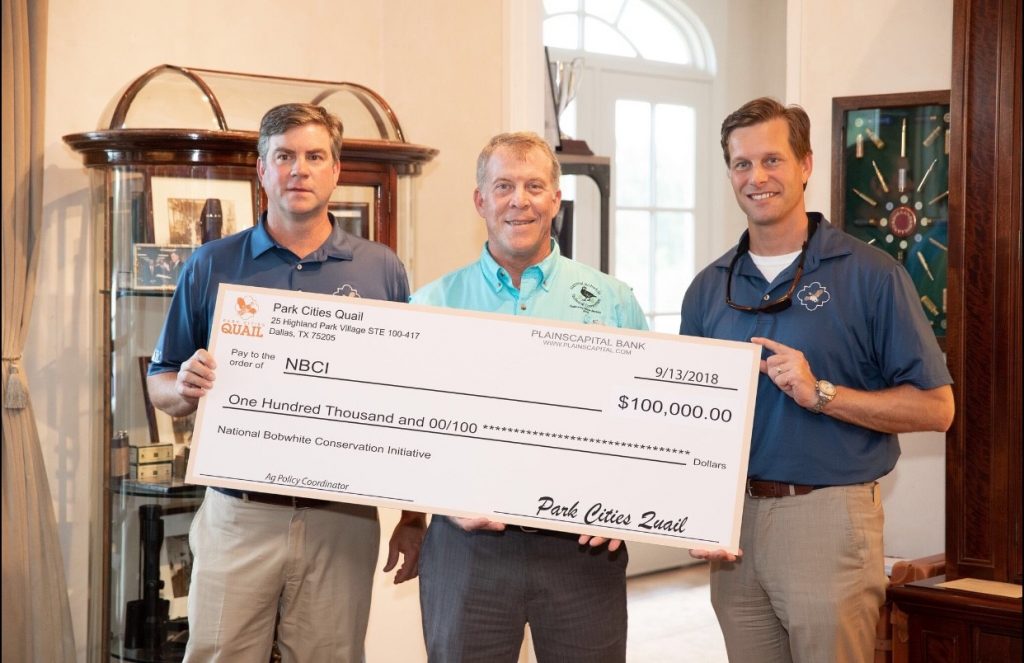 Long-time supporters of the National Bobwhite Conservation Initiative (NBCI), Park Cities Quail Coalition in Dallas, Texas, has increased its backing of the 25-state bobwhite restoration effort with the awarding of $100,000 for NBCI’s agriculture liaison position in Washington, D.C., for the next year.

“That amount, which is unrestricted dollars, will cover the entire cost of this full-time position in our nation’s capital,” said NBCI Director Don McKenzie, “as we continue to provide the only consistent, dedicated voice for bobwhites for favorable federal conservation policies. If it weren’t for Park Cities Quail Coalition’s commitment, NBCI would not have such a strong voice in D.C. making bobwhites a national issue. Unrestricted dollars are critical to this effort.”

McKenzie said the Dallas-based conservation group’s backing is primarily responsible for NBCI’s ability to establish inroads for bobwhites with a host of federal agencies, including the Farm Service Agency and the Natural Resources Conservation Service (NRCS), the National Park Service and the U.S. Forest Service, all having positive impacts on thousands of acres of habitat restoration.

One example is the Bobwhites in Grasslands project with the NRCS, which targets over 150,000 acres in nine states, and will provide technical and financial assistance to landowners interested in converting pastures of exotic, endophyte-infected fescue to drought-tolerant native grasses and wildflowers, along with developing prescribed grazing plans. A similar bobwhite project is being implemented by NRCS on timberlands in six states.

“Park Cities Quail Coalition is thinking bigger than Texas and by doing so is literally having a huge impact on the nation’s wild bobwhite restoration landscape,” said McKenzie. “We appreciate their support, as should everyone dedicated to this effort.”

Headquartered at the University of Tennessee’s Institute of Agriculture/Department of Forestry, Wildlife and Fisheries, NBCI is a science and habitat-based initiative of the National Bobwhite Technical Committee (NBTC) to elevate bobwhite quail recovery from an individual state-by-state proposition to a coordinated, range-wide leadership endeavor to restore wild bobwhites on a landscape scale. The committee is comprised of representatives of 25 state wildlife agencies, various academic research institutions and private conservation organizations. Support for NBCI is provided by the Federal Aid in Wildlife Restoration Program, state wildlife agencies, the Joe Crafton Family Endowment for Quail Initiatives, the University of Tennessee, Quail & Upland Game Alliance, Park Cities Quail Coalition and Roundstone Native Seed.

Park Cities Quail (PCQ) is a 501(c)3 non-profit organization run by a group of Dallas area volunteers who are passionate about their sporting tradition and are determined to make it available to future generations. By being completely volunteer, we are able to donate virtually 100% of every dollar raised towards quail research and youth education. In the past eleven years this group of individuals has raised and donated over $8,600,000 directly to the cause! PCQ also spawned Quail Coalition, a statewide organization which now boasts 12 chapters and over 4,000 members. www.quailcoalition.org.