I recently attended the Longleaf Partnership Council (LPC) meeting held in conjunction with the Longleaf Alliance’s Biannual meeting in Alexandria, Louisiana. The LPC meeting was a day and a half of intensive discussions with all the partners involved. The LPC is responsible for implementing America’s Longleaf Restoration Initiative (ALRI), which is a collaborative effort of multiple public and private sector partners which actively supports range-wide efforts to restore and conserve longleaf pine ecosystems. 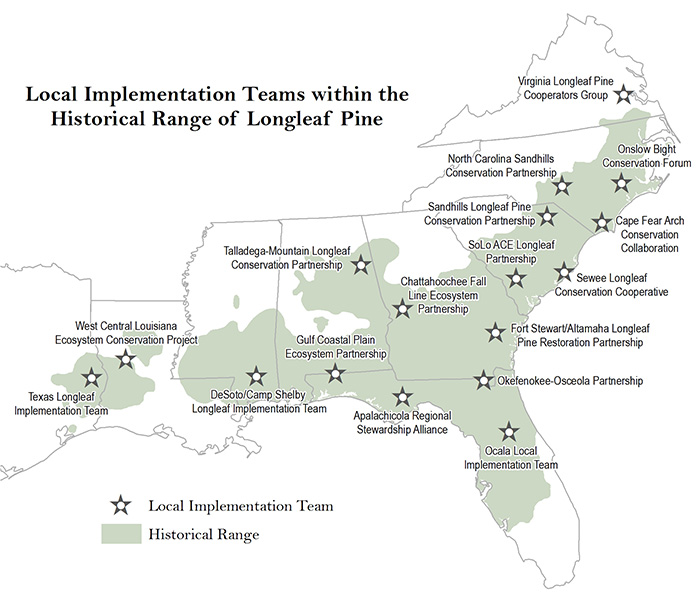 In the ALRI 2017 Accomplishments Report, Ken Arney said “When it comes to biodiversity, few ecosystems in the continental U.S. can contend with longleaf pine, but after years of overharvesting and land-use changes, longleaf pine forests have almost totally disappeared from the landscape.” The ALRI partners’ vision is to have functional, viable longleaf pine ecosystems with the full spectrum of ecological, economic and social values inspired through the voluntary involvement of motivated organizations and individuals. The National Bobwhite Conservation Initiative has a permanent seat at the LPC table.

The 12th Biennial Longleaf Conference, hosted by the Longleaf Alliance, followed the LPC meeting. Over 300 longleaf enthusiasts attended. Participants included landowners from across the longleaf region, which stretches from southern Virginia to east Texas, foresters, biologists, professionals from the Natural Resources Conservation Service, the US Forest Service and several NGO groups that are involved in the longleaf restoration effort. The meeting included great speakers to open the meeting, an excellent plenary session, many great breakout sessions that had too many topics that I wanted to hear about with too many of them concurrent.

To me, the highlight of the conference was the field trip. Traveling south from Alexandria, we headed first for Beauregard Parish and Daigle Farms, the 2017 Lower Mississippi Valley Joint Venture Private Landowner Conservation Champion and a Louisiana Department of Wildlife and Fisheries Natural Heritage Site. Once a clear-cut site, this property now represents a functioning longleaf pine savanna, supporting abundant wildlife habitat, wood products and native understory forage for quality Braford and Brahman cattle. This property also maintains foraging and nesting habitat for the red-cockaded woodpecker along with maintaining habitat for bobwhites, wild turkey and other nesting grassland birds. The landowner also understands the importance of water quality and maintains many ephemeral wet weather areas on the property. Prescribed fire is also used in conjunction with the cattle and timber harvesting to maintain the habitat on Daigle Farms. Owner David Daigle also received the Gjerstead/Johnson Landowner of the Year Award presented by the Longleaf Alliance. This award recognizes a private landowner for ensuring the future of the longleaf ecosystem on private land.

Following our visit at Daigle Farms and lunch at one of the recreation areas on the Kisatchie, we headed to the Vernon Unit of the Calcasieu Ranger District for presentations by Kisatchie National Forest staff, along with other partners, about management activities within the Vernon Unit and surrounding areas. The Vernon Unit has earned the unique nickname of the “Burnin’ Vernon” because of the frequent use of prescribed fire that has shaped the longleaf forest here. Because of the frequent fire there is a diverse and rich understory of native warm season grasses which are dominated by bluestem varieties, forbs and fall flowering species. The red-cockaded woodpecker, bobwhites, and the Louisiana pine snake all find a home on the Vernon Unit. Active and compatible timber management is being practiced and coexists with this abundant diversity of species.

We were able to learn about work in areas of prescribed burning, endangered species, wildlife habitat management and timber management and the partnerships that exist to make all of this happen. We heard Cody Cedotal, of the Louisiana Department of Wildlife and Fisheries, describe the ongoing work on the Kisatchie, where the LDWF and USFS — along with other partners — are working to create a bobwhite focal area that will be included in the NBCI Coordinated Implementation Program (CIP). A personal highlight occurred during the endangered species portion of this tour. After ending his presentation on RCWs, the speaker played electronic calls and was able to call up four birds to the cavity tree that was directly behind the tent. I have seen RCWs looking through a scope from the ground into the nest, but never have had the opportunity to see one flying around and on the outside of a cavity tree.

The longleaf pine ecosystem is said to be the most diverse ecosystem outside of the tropical rainforest. Before European settlement, it is estimated that longleaf pine covered 90 million acres across the southern landscape. Through modern logging practices, urban and suburban development, intensive forestry, agriculture practices and fire suppression, longleaf pine has been reduced in acreage by over 80 million acres. These are some of the same reasons are some why we have seen the demise of the Northern Bobwhite. In 2010, when the ALRI plan was written, there was approximately 3.4 million acres of longleaf pine. It is currently estimated that there are 4.1 million acres across the landscape. The 15-year goal of the plan is to have eight million acres of longleaf pine in 2025. The goal includes establishing approximately 190,000 acres per year, identifying and converting mixed stands that have a longleaf component to longleaf-dominated stands, and improving and maintaining the existing acreage, with an emphasis on increasing the acreage of prescribed fire accomplished annually.

The Longleaf Restoration Plan has some lofty goals, but with all of the partners involved the initiative is well on its way to its 2025 goal. To reach these goals, on-the-ground implementation requires coordination at state and local levels across all agencies and across all lands. Currently, there are implementation coordination teams at 17 locations across 9 states, as shown on the accompanying map.

By participating in the Longleaf Partnership Council, NBCI can help shape efforts to not only restore an important ecosystem but also provide guidance in restoring an iconic bird such as the Northern Bobwhite across that ecosystem.