I was on a string there of getting my blog posts out on time or even early. My hat’s off to those folks who blog daily, or some practically hourly. I’ve never been a writer who can simply sit down and start filling a page. My posts (at least the ones worth reading) usually come to me while I am out and about. This month’s post has been a bit slow to come to me. I had started a post on “technology and fair chase” questions… but figured I’d offend half of the readers and upset the other half… so I decided to simply say “Happy Thanksgiving!” to all of you and share this list of highlights from our past year. Keep in mind there is more to our life than quail… we do all we can for quail, but quail is not the only species in need of our support.

Quail Recovery Initiative – VDGIF completed the 9th year of the Quail Recovery Initiative (www.dgif.virginia.gov/quail) as of June 30, 2018. During this time period, the private lands wildlife biologists made a total of 4,285 site visits and wrote 1,980 management plans. Over the last fiscal year, the five private lands wildlife biologists continued to do great work, making 625 landowner site visits and 310 new contacts, writing 270 management plans, and working with landowners who own over 47,700 acres. They helped establish or maintain approximately 4,344 acres of early-succession habitat. Approximately 1,395 acres of this total was via the forestry Best Management Practices (BMPs) in partnership with Virginia Department of Forestry.

In addition, the Quail Management Assistance Program (QMAP) continued to grow with 445 landowners now enrolled owning over 105,609 acres with 14% in some form of quail management. Additionally, six of our team members participated in the 24th annual National Bobwhite Technical Committee (NBTC) meeting in Albany Georgia. Staff from VDGIF continue to serve as officers and members of NBTC. 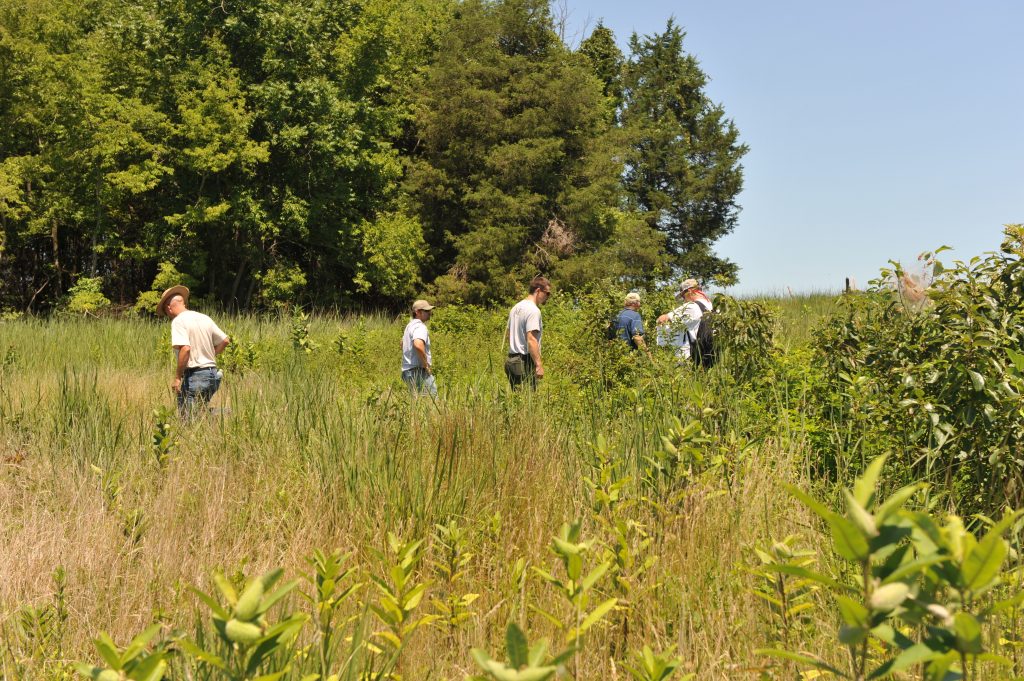 Virginia is one of 21 states participating in the National Bobwhite Conservation Initiative’s (NBCI) Model Quail Focal Area Monitoring Program, marking our sixth year of participation. Approximately 997 acres of habitat management were completed on the CIP Focal Area. In early August, 2017, VDGIF, staff along with NBCI and National Park Service staff, held a workshop at Manassas National Battlefield Park (NBP) to instigate the formation of Virginia’s second NBCI CIP Focal Area. Manassas NBP is the new focal area. Staff also conducted several successful field days and workshops that attracted over 250 participants. Our staff continues to work on a book entitled “The Northern Bobwhite Quail of the Mid-Atlantic States.” Staff also serve on the Virginia Prescribed Fire Council and the Forest Stewardship Committee, and also maintain their own Facebook page (www.facebook.com/VirginiaBobwhiteBulletin).

Fish Hatchery Pollinator Plantings – The small game team, working in conjunction with Outdoor Education and Fisheries staff, completed two pollinator habitat plantings—one at Vic Thomas and one at Montebello fish hatcheries. These projects provide good habitat educational opportunities and have been well received by the public.

Southeastern Fox Squirrel Research Project – The small game team—working in conjunction with staff from Virginia Tech, The Nature Conservancy, and Ft. Pickett Army National Guard Maneuver Training Center—developed and obtained outside funding for a research project on southeastern fox squirrels (Sciurus niger niger). The project will take place on The Nature Conservancy’s Piney Grove Complex and on Ft. Pickett. The project will be the first of its kind to examine the life history of this relatively rare subspecies of fox squirrel in Virginia. The research may eventually contribute to the species population recovery. During October, our staff, partner staff, and technicians from CMI successfully hung 135 boxes (75 at Ft. Pickett and 60 at Piney Grove), and 15 more will be hung after logging at Big Woods Wildlife Management Area (WMA). The project is underway, being fully funded in year one by Ft. Pickett. Future funding is not secure. Numerous sightings have occurred at Piney Grove. Fox squirrels have also been confirmed (one by road kill) within a few miles of Ft. Pickett.

Quail Management Workshop – A quail management workshop was held in Purdy, Virginia, in conjunction with Virginia Dept. of Forestry and Cooperative Extension. More than 65 landowners and professionals attended. The workshop featured the latest information in quail management science from Tall Timbers Research Station and included a field tour of a well-managed private property in the area.

Virginia Quail Council 9th meeting – On October 2, 2018, we conducted the ninth meeting of the Virginia Quail Council at Wakefield 4-H Center. Approximately 35 VDGIF and partner staff attended, along with representatives from the National Wild Turkey Federation, Ruffed Grouse Society, US Fish & Wildlife Service, and other entities. The meeting was headlined by an opening presentation from NBCI Director Don McKenzie. Regional staff gave updates on the ongoing work and partnerships at Big Woods/Piney Grove WMA, and Jay Howell gave a comprehensive review of the NBCI Coordinated Implementation Program. The meeting was followed by a field tour of the Big Woods State Forest, Big Woods WMA, and Piney Grove Preserve.

“Learn and Burn” Workshop – A workshop for aspiring prescribed fire practitioners was held in conjunction with Virginia Cooperative Extension, Virginia Tech, Virginia Prescribed Fire Council, Virginia Department of Forestry, The Nature Conservancy, and other partners at Wakefield Airfield 4-H Center. The morning indoor session was followed by a live prescribed burn in the afternoon, allowing participants to gain hands on learning. Approximately 30 attended.

Private Lands Wildlife Biologists Species Diversity Training – A special presentation and field day was held for the Private Lands Wildlife Biologists providing them with training from three of VDGIF’s species specialists. Presentations were made by our herpetologist, aquatics biologist, and small mammal biologist, followed by a field trip to discuss habitats for multiple species.

Provision of Latest Quail Management Information to Staff – Multiple copies of the new Tall Timbers Research Station’s Quail Management Handbook were obtained for VDGIF staff at no cost. The small game project staff also prepared a detailed summary of the findings from this book and provided them to all biological staff. 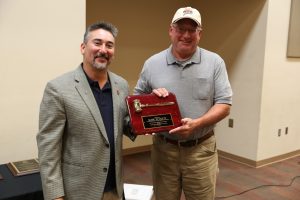 Marc Puckett, right, receives award “in recognition of outstanding service and leadership as executive committee member and chairman of the National Bobwhite Technical Committee 2010-2016.” At left is Robert Perez of Texas, the new NBTC chair.

NBTC’s Past-Chair Award. The award was given for exceptional service and leadership during this person’s tenure as Chair and on the NBTC Executive Committee from 2010-2016. The presentation was made during the awards banquet of the recent NBTC annual meeting in Albany, Georgia.