First things first. I am proud to be a Virginian. Always have been and I always will be. I believe individuals, peoples, entities, states and nations can and do change for the better through time. I know I have. And like Forrest Gump said, “That’s about all I got to say about that.”

Those of you who hunt, fish or play sports of some kind know what I mean by “making a season.” In sports like football, basketball or baseball it may have been the number of good plays made, memorable hits, baskets or runs scored. When I was a teenager it was simple and I kept a ledger of animals harvested in a spiral bound notebook. It began with doves and was followed by squirrels, rabbits, deer and turkey (every now and then a grouse, and at that time I could never hit the quail I saw). Later when I trapped it was about pelts of this or that hanging from my Mom’s basement ceiling and what prices we got for them, ending with our total season’s take and money earned (we never bothered to deduct our costs for gas, lure, new traps, etc.).

Time passes and boys become men (those that survived their teens and twenties – not all my friends did). What makes a season begins to change. At some point it becomes adventure. Taking trips to new hunting grounds, new streams, or trying for new species can make a season.

I have reached a stage now where I fish more than I hunt, and I stopped counting what was in my harvest a long time ago. These changes occur slowly and differently for everyone. Time demands also increase, having old parents, young kids, and busy jobs means sometimes just enjoying an uneventful day out in the woods is a priceless blessing. I also tend to look for good weather now more than I used to. I don’t care that I can catch more trout on a rainy day, or find more woodcock when it’s cold and dreary, I enjoy being out in the sun. A memorable day can now be one where the sun felt particularly good on my shoulders; and the smell of the fresh spring earth coming to life after winter is enough to lift a day to memory. 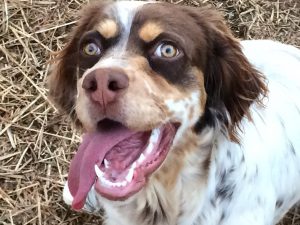 This year was particularly tough in some ways. In my area the early December snow really put a hurt on the woodcock season. I am sure those further south or east benefitted from our loss, and I am happy for those who did. For various reasons, time hunting was limited, too. Sometimes the stars just don’t align. But looking back on this season, I still see enough moments, some very special, to have felt it was “made.” A worthy season in the pages of my mind.

To begin with my new dog proved she had game. You never know with a dog. But no doubts remain, she loves nothing more than getting into birds, and we did that often enough to keep it fun. For those of you who may believe all of us who hunt just go for a heavy game bag, I killed a grand total of one woodcock this season, and no quail. But Tilley’s first woodcock came over her point after a tough morning of many miles walked, and many birds flushed that I could not get a gun on. And we had at least 15 or 20 “productive” points throughout the year, meaning she pointed and there was indeed a bird there, though scarcely another shot was fired.

I was blessed this year with a handful of woodcock that settled in around my yard after the snow left. And Tilley has had a field day within 100’ of my front porch. Further, hunting down east with a couple good friends on invite from them, we found four coveys of quail in one day, and Tilley had her first quail taken over her point. Out of those four coveys found, we only shot one quail…but we were in birds all afternoon and it was a great day. What a sight to see, four setters fanned out hunting and happy all day, and to share that with good company.

Thinking back to warmer weather, I also had a great dove hunt. The first in many years. I was asked to share in a “drawn” lottery hunt by one of my best friends. It was hot – just like a September dove hunt should be, but we got there early and had a place where the sun gave us shade all afternoon. My friend had a nice spread of dove decoys out and he brought a young black lab to work with. The doves came in trickles at first but then started showing pretty steady. Rather than shoot to kill a limit, my friend and I would shoot one at a time and then he would work his lab on the retrieve. It was as much fun watching the dog work as it was shooting. And we sat close enough to talk all afternoon and share some stories and laughter.

Come to think of it…it was a fine season well made. I hope yours was, too. Now on to the fly-fishing season.