The National Bobwhite Technical Committee (NBTC) presented Nick Prough, chief wildlife biologist with the Quail and Upland Wildlife Federation, its Leadership Award at the group’s annual meeting in Carbondale, IL, recently. The award recognizes an NBTC member that exemplifies leadership, productivity and professionalism in advancing the National Bobwhite Conservation Initiative (NBCI) as demonstrated within the previous three years prior to the nomination. 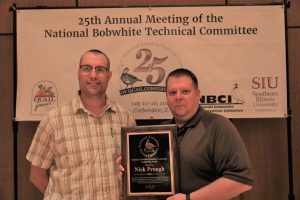 Prough’s work with the group dates to the early 2000s as a young private lands biologist developing land management plans to help Missouri landowners restore bobwhites. His efforts resulted in one of the first counties in the nation to reach the NBCI 1.0 habitat and bird goals. He turned to the non-profit world where he excelled at working with members, landowners and partners, helping build a new non-profit solely centered on “turning the dirt” under a multi-species brand called the Quail and Upland Wildlife Federation.

“Over the last three years as a member of NBTC, his expertise and leadership were demonstrated on the NBTC Steering Committee and, most importantly, the Grasslands Subcommittee,” said John Morgan, chair of the awards committee. “Under his leadership products and collaboration flourished. He shepherded the balance between rangelands and pasture interests, which has always been a challenge. Relevancy and proactive application of the products were his core tenets. Some of the committee’s latest work centered on grazing publications for the East and the West that outline bobwhite-friendly management. What could stand as one of the NBTC’s most impactful accomplishments was initiated during his tenure. He was a critical part of the Natives First team championing support from partners, garnering political support, initiating grassroots activism and offering guidance along the way. The NBTC just wouldn’t be the same without him.”

About NBCI
Headquartered at the University of Tennessee’s Institute of Agriculture/Department of Forestry, Wildlife and Fisheries, NBCI is a science and habitat-based initiative of the National Bobwhite Technical Committee (NBTC) to elevate bobwhite quail recovery from an individual state-by-state proposition to a coordinated, range-wide leadership endeavor to restore wild bobwhites on a landscape scale. The committee is comprised of representatives of 25 state wildlife agencies, various academic research institutions and private conservation organizations. Support for NBCI is provided by the Federal Aid in Wildlife Restoration Program, state wildlife agencies, the Joe Crafton Family Endowment for Quail Initiatives, the University of Tennessee, Quail & Upland Game Alliance, Park Cities Quail and Roundstone Native Seed.