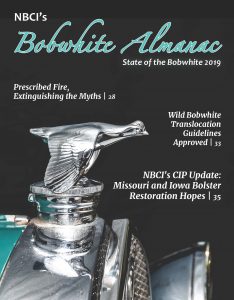 The cover of the State of the Bobwhite 2019 gives a nod to the once iconic nature of the bobwhite quail in American culture with a photo of the flushing bobwhite Henry Ford had designed as an option for his Model A. To him the bobwhite represented the quick takeoff/getaway capability of his new automobile. (Heather Inman)

The myths associated with prescribed fire, a member state that set a 40-year record for bobwhite abundance in one of its bobwhite focal areas and the final adoption of wild bobwhite translocation guidelines are all featured in the new State of the Bobwhite (SOTB) 2019, published annually by the National Bobwhite Conservation Initiative (NBCI) to provide a range-wide snapshot of the bird’s population, hunting and conservation status.

Prescribed Fire, Extinguishing the Myths delves into the growth of prescribed fire in the 25 states comprising the core bobwhite range, while tackling various myths that have led to resistance among some audiences to embrace the fundamental management technique.

Missouri’s NBCI Coordinated Focal Area Implementation Program, achieved the state-determined target quail densities on both the 5,574-acre Bee Ridge Focal Area (one bird per two acres) and the 5,242-acre 2C Focal Area (.91 birds per acre) for multiple years. NBCI’s minimum population density requirement for sustained survival is 0.2 birds per acre, while minimum density for hunting is 0.5 birds per acre. The 2C density figure is a 40-year record for Missouri.

The 25 NBCI states managed 3,764,671 acres for bobwhites in 2018, according to the NBCI’s 2019 State of the Bobwhite report. The figure is down about 200,000 acres from the previous year due to a sizeable decline in USDA Farm Bill programs, according to member states, however, the report indicates a stability in management of state agency lands and a continued high level of management on private lands, whether led by state agencies or partners.

The 74-page report also highlights individuals and entities from 10 states who made contributions to range-wide restoration of wild bobwhites sufficient to earn them the NBCI National Fire Bird Conservation Award and explores a Tennessee state park that is not only “for the birds” but uses the bobwhite as the key indicator species for their management activities. It also offers a “tip of the hat” to the historically “iconic” nature of the bobwhite with the report cover featuring the flushing bobwhite radiator cap of the Ford Model A, an option ordered and overseen by Henry Ford himself to adequately represent the quick take-off capabilities of his new Model A.

To examine a digital version of the 2019 State of the Bobwhite, please visit https://tinyurl.com/y479fg6c.

Headquartered at the University of Tennessee’s Institute of Agriculture/Department of Forestry, Wildlife and Fisheries, NBCI is a science and habitat-based initiative of the National Bobwhite Technical Committee (NBTC) to elevate bobwhite quail recovery from an individual state-by-state proposition to a coordinated, range-wide leadership endeavor to restore wild bobwhites on a landscape scale. The committee is comprised of representatives of 25 state wildlife agencies, various academic research institutions and private conservation organizations. Support for NBCI is provided by the Federal Aid in Wildlife Restoration Program, state wildlife agencies, the Joe Crafton Family Endowment for Quail Initiatives, the University of Tennessee, Quail & Upland Game Alliance, Park Cities Quail and Roundstone Native Seed.