It is with great happiness that I write this note to share with you how nice it is for me this year to be “back in the hunt.” My dog, Tilley, is doing well. Just a little over 2 years old, she is smart, happy, biddable, friendly to all (humans, dogs and about everything else), hunts very well, stays in close, listens, has a knack for finding birds that are moving and is just generally a pleasure to hunt with. 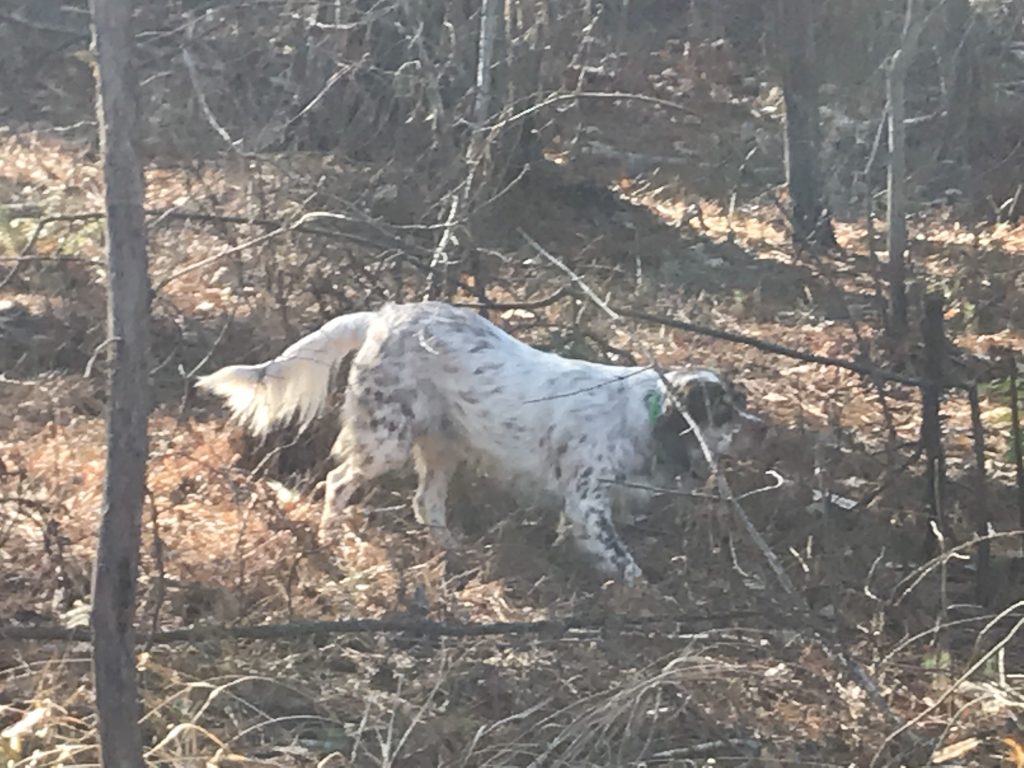 Tilley on a woodcock point, crouching like a setter should do. (Photo: Marc Puckett)

Those of you who have gone without a good dog for a few years like I did know what I mean by being “back in the hunt.” Upland bird hunting is not the same when you don’t have a dog in the running. Tilley is still a work in progress. Her backing manners need some work. But I like a dog that adjusts and relocates, as long as they are right and not bumping birds. Of course I don’t take much credit for the way Tilley turned out (other than I spent time with her every single day, rain, cold, heat or snow – every day…the gift of time). Most of it was good lineage, and the rest was due to a patient friend of mine who helped me train. He’s trained enough bird dogs and labs to fill a football stadium over the years. You know who you are. Thanks!

Speaking of hunting, we have been out a number of times this year. We have witnessed some really good dog work. I won’t go into detail here – some of it was worthy of a magazine story, but one I’ll likely never find time to write. The older I get the more I just try to be in the moment. I take fewer photos and feel less and less need to let the world know about anything I experience. Maybe someday when I am too old, or too sick to get out myself, and if my memory still serves me, I’ll write some of these stories for the simple reason they might bring a smile to an old bird hunter’s face, or spark a kid to give bird hunting a try. In the meantime, there’s already a lot more sand in the bottom of my hour glass than in the top and I plan to spend as much of what I have left out doing what I love, not talking about it. I’ll see you out there sometime.

Also – this link will take you to the annual State of the Bobwhite report – many thanks to John Doty and all who made it happen again this year. It is no small feat. The work it describes ongoing on behalf of bobwhites and their habitat cohorts is monumental.

Lastly, just a few inadequate words to say thanks to three men who spent most of their adult lives working diligently in the world of wildlife conservation. Longtime NBCI Director Don McKenzie stepped down from the position after 15 years at the helm. The list of NBCI accomplishments under his tenure is long and well noted in the State of the Bobwhite Report. For those of us in this business we know the moniker “swimming upstream” is an understatement. Don “fought the good fight” and left “nothing on the field” and speaking as one who knows that feeling, it takes a toll. Thanks to Don for giving it all he had – no regrets my friend.

Lifelong, well known, quail and turkey scientist and Science Coordinator and Assistant Director of NBCI since 2010, Tom Dailey, retired in September. Tom spent a highly productive career working for Missouri DNR for decades, before retiring from there and joining NBCI full time. I don’t know how old Tom is, but I suspect he worked into his 70s with passion right up to the end. His knowledge, integrity, ability and humility were unparalleled. I suspect he is out bird hunting today with one of his grandkids. Thanks, Tom, for all you did for bobwhites!

And long-time wildlife conservationist in Washington DC, Tom Franklin, retired and stepped down from his NBCI position of Agricultural Policy Director also at the end of September. Tom spent several decades working for The Wildlife Society in Washington. He later joined the Theodore Roosevelt Conservation Partnership as Washington liaison. Part way into that role, NBCI picked up half of Tom’s salary and time and for nearly a decade he represented the interests of bobwhite enthusiasts in Washington helping see through several key habitat initiatives, including CP-33 Center Pivot Corners being allowed under the Conservation Reserve’s Buffers for Bobwhites program. This inclusion has literally helped establish thousands of acres of early-succession habitat in states with large scale center pivot agriculture. This was but one of the things Tom helped accomplish by knowing how to communicate with politicians in our Nations’ Capitol. Thanks for all you did Tom and happy hunting!

Merry Christmas to all of you.