Fall is here in Alabama, or it’s supposed to be. We are still having those warm days mixed in, but our current temperatures are a welcome relief from the hot, humid days of summer. Leaves have started to turn color and drop, and many weeds have started to brown. Hunters are getting stirred up and tuning up bird dogs for the approaching quail season. Fall quail surveys are being conducted and population trends investigated. Folks that hear increases in the number of calling coveys reflect on their hard work and management practices that may have contributed to even the slightest population increase. A combination of many management practices is bound to be included in any successful quail management program. Brood habitat management is going to be near the top of the list, and now is the time to plan and prepare for next year.

Why is it important and what is brood habitat? If quail broods or chicks can’t survive to join the fall population, there will be less or not enough quail for hunting. Research in Alabama and Georgia rank brood survival as second on the list of parameters (factors) that determine population growth, right behind over-winter survival. The research has also shown that brood survival is directly related to quality and quantity of brood habitat on any property.

Brood habitat or brood-rearing cover consists of plants (e.g., weeds such as ragweed) where adult quail raise their chicks for the first few weeks after hatching. Pretty simple, right? Not quite. Good brood habitat is often the most lacking cover type on any property, state- and region-wide. If they make it out of the egg, quail chicks are about the size of a bumblebee at hatching and must make it two weeks before they can fly. Their flightless condition and tiny size make them prime targets and highly susceptible to most all predators. Good brood-rearing cover provides protection and food for quail chicks, at the same time. Quality brood habitat has an overhead canopy, bare ground underneath or openness at ground level, and an abundance of insects. Those components provide protection from predators and allow chicks to easily move and catch insects which make up almost their entire high protein diet for the first few weeks.

How do you create and maintain brood habitat? Brood habitat can be provided in multiple ways but usually involves some type of soil disturbance. Fall disking is probably the most popular method used around the South for creating brood habitat. Disk fields, logging decks, and forest openings in fall and allow them to grow up in weeds during spring and summer. Ragweed is the preferred weed that managers like to see for brood cover, but it doesn’t have to be all ragweed. As long as the weeds form an overhead canopy, are open at ground level, and attract a lot of bugs, you’re in business. If the proper weed response isn’t achieved, plant a mixture of ragweed, partridge pea, and other legumes. Fallowed planting of grains also works well. Maintain by disking a third each fall. Prescribed fire in open pine stands can also produce brood cover but tends to produce better results on rich soil sites.

Brooding season usually lasts from mid-May to October in the Deep South. Chicks need good brood habitat for that entire time period. Proper brooding cover is critical for increased brood survival and overall population increases. On the best quail producing lands I’ve worked on (south GA), brood habitat makes up anywhere from 15 to 30 percent of each property in evenly distributed two to five-acre weed fields. Those numbers may not be possible for many properties, but providing as much quality brood habitat as possible is vital when managing habitat for bobwhite quail. 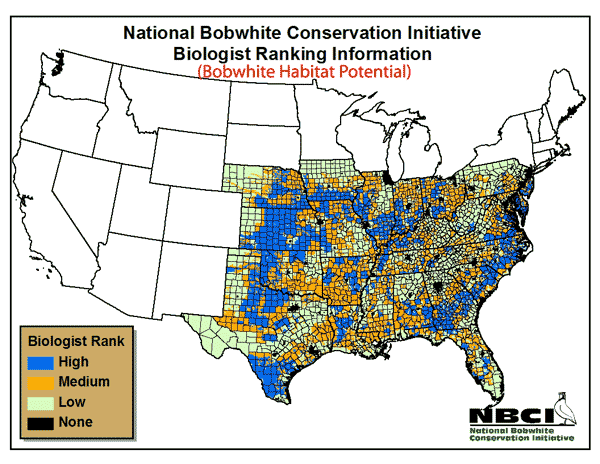 The Bobwhite Roundtable is a platform to give a voice to the occasional poster with a message, whether it is NBCI staff that don’t have “regular” blogs or any of the 25 NBCI state “quail coordinators” or others who work hard supporting the vision of landscape scale restoration of wild bobwhites.