Listen to the call of the bobwhite quail 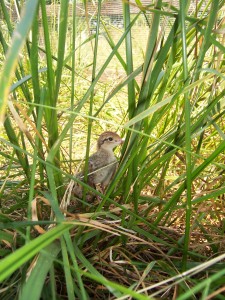 Clearly, any species that can persist across such an extensive geographic area must have the ability to cope with a wide range of plant communities, soils, and climate. The northern bobwhite is precisely such a species; abundant populations can function in agricultural, forest and rangeland habitats on a nearly continental scale.

Northern bobwhites are generally considered to be an early-succession species. While this is certainly the case throughout the humid Southeast, the eastern seaboard and even into parts of the central Midwest, the concept tends to not hold as well in rangelands where bobwhites thrive in mid to later successional stages of habitat. 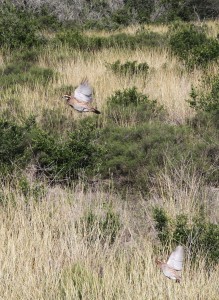 The biological mechanisms that allow bobwhite populations to function in this wide range of vegetation conditions are related to habitat components that support key life history requisites related to 1) nesting, 2) brood rearing, 3) escape cover, and 4) loafing cover. When these four requisite habitat components are present at the correct scale and configuration within the geographic range of this species, wild bobwhite populations are nearly always present.

In order to understand habitat from the perspective of a bobwhite, you need to lie down and put one cheek of your face on the ground. This is a quail’s eye view of the world. For a bobwhite to survive, everything they need must be found within 6-10 inches of the ground, whether it is a clump of bunchgrass to nest in, a patch of ragweed or Croton to forage for insects and seeds with broods in, or a patch of brush for escape or loafing cover. 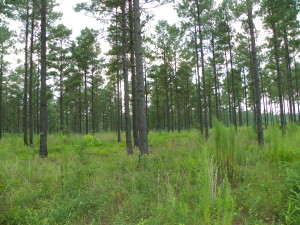 Huntable populations of bobwhites can be found in, or restored to, the pine forests of the Southeast, mixed forest and agricultural landscapes of the Midwest, and rangelands of Texas and Oklahoma, among nearly all other places within their original geographic range, so long as the appropriate habitat components are sustained or restored and urban-suburban encroachment on these habitats is not a factor.