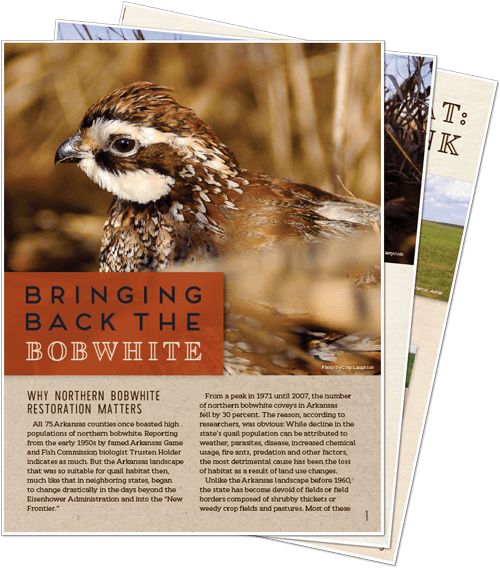 Some Arkansas residents never have heard the whistle of the bobwhite. Those who have and those who remember it well are anxious to hear it again throughout The Natural State. This brochure seeks to educate the reader about the How and Why of bringing the bobwhite back to Arkansas.

Through a series of surveys, advisory meetings, and staff input opportunities, the VDGIF evaluated the success of the QRI over the past 10 years. This report outlines where the initiative has been successful and where there are opportunities for improvement. In addition, it provides specific recommended goals, objectives, and strategies for advancing quail and early-successional species habitat management over the next decade.

This plan was developed by wildlife biologists employed by the Arkansas Game and Fish Commission. Large portions of this plan are adapted from the 2001 plan written by Fred Ward and the small game team that were subsequently revised in 2006 by Steven Fowler and the Quail Team. We greatly appreciate their efforts in moving quail management in Arkansas forward.

Thanks to the National Bobwhite Conservation Initiative, this plan offers a more universal direction. The NBCI works on a unified range-wide strategy to restore populations of northern bobwhite. They offer guidance with the help of 25 state wildlife agencies, as well as numerous conservation groups and research institutions, to achieve widespread restoration of native grassland habitats and huntable populations of wild quail. The landscape-scale, habitat-based strategic plan establishes the first-ever national vision and road map for habitat restoration and population recovery. Don McKenzie of Ward, Arkansas, is the executive director of NBCI. He has provided valuable guidance toward quail recovery.

Kansas outlines its action plan in stepping down the national strategy of the National Bobwhite Conservation Initiative to the state level.

A quarterly report from the Kansas Department of Wildlife, Parks and Tourism on the activities and successes of the Kansas Quail Initiative, organized in 2012.