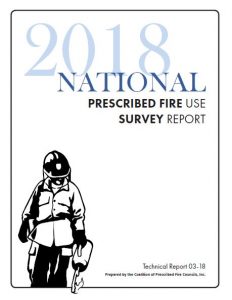 The National Association of State Foresters (NASF) and the Coalition of Prescribed Fire Councils (CPFC) worked collaboratively to produce the 2018 National Prescribed Fire Use Survey Report. Since 2012, this report has been compiled every three years, and is unique among fire surveys. Numerous surveys have been conducted that investigated the challenges that fire managers and land owners face relative to prescribed fire use in the United States. Although informative, these surveys do not specifically address the challenges state agencies navigate in managing fire programs. States operate independently to develop policy and regulations that work for their own interests; as a result, prescribed fire programs differ greatly by state and region. This system of state autonomy is the foundation upon which fire programs are built, therefore it is especially important to have a deeper understanding of each state’s perspective.

This year’s survey results showed 11.3 million acres were treated with prescribed fire in 2017. The majority of acres (80%) were burned to meet forestry objectives with the balance related to agriculture. Although the Southeast led the nation in total acres (7.6 million), the West’s 3.3 million acres represented an increase over 2014 and 2011 estimates. Despite this increase in burn acres in the West, the Southeast and the Northeast, as well as the nation as a whole, have experienced a decline in total prescribed fire acres. The national total is down 12% from 12.8 million acres in 2011; only 14 states (28%) increased their prescribed fire activity from 2011 to 2017. Consistent with previous surveys four states burned 1+ million acres, but for the first time zero acres were reported by some states. At the same time, the number of prescribed fire councils has grown to 35 councils in 31 states, a 40% increase since 2011. Weather, capacity, and air quality/smoke management remain the top three impediments for prescribed fire implementation. Weather outranked all other categories with 8 out of every 10 states identifying it among their top three impediments. Although the wildland-urban interface (WUI) is often cited as a reason for not getting fire on the ground, surprisingly only one state chose WUI as the number one limitation on the use of prescribed fire, and WUI was the impediment category with the fewest states listing it among the top three impediments. Significantly, this survey documents for the first time the degree of liability as defined in each state’s prescribed fire statute(s). Five states (10%) have no prescribed fire law, and only seven states (14%) have the highest degree of liability protection in the form of gross negligence laws.

Clearly programmatic similarities and differences exist at national, regional, and state scales when considering prescribed fire management. The path from authorizing an individual prescribed burn to the act of placing an active flame on the ground is riddled with challenges at every step. Only by fully understanding our collective role and responsibility can prescribed fire be safeguarded in the future. It is the intent of the NASF and CPFC that the National Prescribed Fire Use Surveys serve as a means to foster collaborative support and partnerships that increase the appropriate use of prescribed fire as a natural resource management tool to enhance forest health and public health and safety.

This report is a collaborative effort of the National Association of State Foresters and the Coalition of Prescribed Fire Councils.

Sign up to receive notification of new blog posts and news.