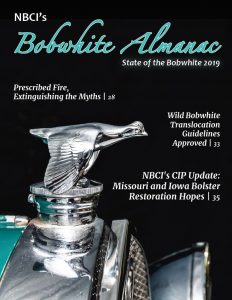 NBCI’s Bobwhite Almanac/State of the Bobwhite Report is an annual publication of the National Bobwhite Conservation Initiative (NBCI) to provide a range-wide snapshot of population, hunting and conservation status of the northern bobwhite, as well as looks at efforts underway to reverse the bobwhite decline.