DALLAS – The Texas A&M AgriLife Extension Service will join a host of other entities to present the seminar “Quail Restoration in North Texas: An Active Approach,” from 9:30 a.m. until noon Jan. 4 in the Dallas Convention Center.

The seminar is part of the Dallas Safari Club’s annual convention.

“It’s no surprise to anyone who spends much time outdoors to learn that wild bobwhite quail numbers are at an all-time low across most of Texas,” said Dr. Dale Rollins, AgriLife Extension wildlife specialist at San Angelo. “The demise of the iconic bobwhite from much of its historic range across North and West Texas is frustrating to all concerned. Habitat loss or land fragmentation is easy to blame east of I-35, but that argument doesn’t hold up over much of the Rolling Plains.

“No one can say for certain what’s caused the precipitous decline in quail numbers,” he said. “I can list 20 or more hypotheses and they all have some credibility, but none holds up across the board in my opinion. A combination of poor weather, namely record drought and heat, along with increasing numbers of feral hogs, fire ants and other predators are having some effect.

“The Rolling Plains Quail Research Ranch is midway through a three-year effort to assess diseases and parasites. All we can say right now is that millions of acres of apparently suitable habitat have few if any, quail on them, hence the desire to try some active restoration approaches.”

Rollins said while good habitat is important, the seminar will focus on identifying active approaches to restoring quail populations.

“Our keynote speaker will be Dr. Bill Palmer from the Tall Timbers Research Station in Tallahassee, Fla.,” Rollins said. “The efforts there have restored not only quail, but also renewed  hope among quail hunters and plantation owners in northern Florida and southern Georgia.”

Joe Crafton of Dallas, with Park Cities Quail, will serve as moderator, Rollins said. He will start the seminar with a summary of quail decline in Texas and end it with a question-and-answer panel at the program’s conclusion.

“We’ve enlisted regional experts from across north Texas to present their respective efforts,” Rollins said. “Jason Hardin, Texas Parks and Wildlife Department upland game bird specialist, will summarize recent research on ‘Surrogators’ which have been popular with some hunters over the past few years. Surrogators are self-contained brooding houses purported to increase survival of farm-reared bobwhites. Chicks are placed in them at two days of age and then released at five weeks.”

Rollins said in his role as director for the Rolling Plains Quail Research Ranch, he will present the ranch’s new initiative, Operation Transfusion, which he said is their effort to actually transplant wild-trapped bobwhites to the historic stronghold of Stephens and Shackelford counties.

Charles Hodges of Dallas, chairman of the board for Texas Tech University’s Quail-Tech program, will summarize their efforts, and finally, Dr. Kelly Reyna of Denton, director of the University of North Texas’ UNT-Quail unit, will highlight their efforts in the eastern portion of the Rolling Plains.

Two Texas Department of Agriculture continuing education units will be available for those with a private applicator’s license.

There is no charge for the seminar, but Rollins notes participants will likely want to attend the Dallas Safari Club convention which has a $20 per person admission fee. Last year’s convention drew about 30,000 hunters and featured more than 1,000 exhibits, he said. This year’s event will feature a special section called Wingshooters’ World.

The host state of Virginia has released early details regarding the 2013 annual meeting of the National Bobwhite Technical Committee. 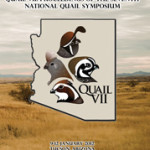 NBCI has a limited time, special prepaid, pre-print offer on Quail VII: Proceedings of the Seventh National Quail Symposium of $28 plus tax (unless you represent a tax exempt entity with your exemption certificate on file with NBCI at the University of Tennessee). The offer is good until Jan. 12. On Jan. 13 the price goes to $40. The volume is expected to ship in late January.

Read the latest issue of the e-Quail Newsletter from the Rolling Plains Quail Research Ranch HERE.

Listen to “Call of the Quail” story on NPR member-station WVTF.

In the Cornell Lab of Ornithology’s newest issue of Living Bird magazine, Jack Conner writes about the bobwhite’s plight and NBCI efforts to restore the species … and urges birding groups to get on board with the effort. Check it out HERE.

Tall Timbers is reporting a much improved quail hatch in the Red Hills region in the latest issue of their E-News. Read more here.

CATAWBA — For 60 years, Wysor Smith Jr. has listened for the mating call of the bobwhite quail, as a hunter and now as a conservationist. But over the decades since the 1970s, as farms have wooded over or sprouted crops of houses and businesses, the “bob-WHITE” call has faded and in places disappeared. Through state and federal programs, however, Smith and his family are restoring quail-friendly grasslands on their 550-acre Craig County farm. He only wishes he’d done it sooner. Read more HERE.

Outdoor writer Ken Perrotte published a piece in yesterday’s Fredricksburg, VA paper about NBCI and quail restoration efforts nationally and in Virginia and North Carolina as a result of our presentation to the Southeastern Outdoor Press Association’s annual conference in Tennessee a few weeks ago. You can check it out at http://news.fredericksburg.com/sports/2012/11/07/ken-perrottes-outdoors-column-panel-favors-initiatives-for-quail-habitat/